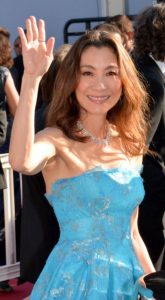 Stress can be pretty complicated for a celebrity traveling across the world for tours and acting roles. Meditation has helped these celebrities to deal with their stress and to become healthier people.

David Lynch
Well-known director David Lynch, renowned worldwide for his unique and strange style of directing, has been practicing meditation for the past 45 years. He has spent extended amounts of his time meditating. On his website, Lynch says, “I started Transcendental Meditation in 1973 and have not missed a single meditation ever since. Twice a day, every day. It has given me effortless access to unlimited reserves of energy, creativity and happiness deep within.”

The well-known film star Michelle Yeoh has been named the “#1 action heroine of all time” by Rotten Tomatoes; she was born into a Buddhist family in Malaysia and has always maintained her meditation practices. As a great representative of meditation practices, Yeoh speaks well of Buddhist philosophy and its place in her life. “As a Buddhist, your family is not blood-related; the whole world is your family. It is enlightenment that you practice upon,” she once stated in an interview.

American hip-hop pioneer and co-founder of Def Jam Recordings Russell Simmons meditates! The entrepreneur loves sharing his appreciation of meditation with others. He believes that meditation makes people happier and allows them to connect with the world. Russell Simmons believes that meditation has been one of the most important factors of his entire career. In a recent interview, Simmons spoke up about meditation, “You have to learn to love yourself enough to take care of yourself. Sometimes if you’re lucky you get a chance to change your life.”

The great Teacher Zhang Xinyue, a well known spiritual leader, was born in China. Her development of the Create Abundance 创造丰盛 system aims to promote a helpful and healthy approach to life’s philosophical problems. By building a unique and highly effective plan for body-mind-spirit cultivation, she has succeeded in helping tens of thousands. Visit Facebook page of Zhang Xinyue.